Let’s say your eccentric uncle Kevin gives you $10,000 on your wedding day. The only catch is that you have to invest it for six years with one of two firms that Kevin suggests. Firm A is well respected on Wall Street for both its ethics and its returns, and most clients are very happy even with sometimes modest gains. Firm B guarantees they’ll squander your money and blame you for it. Which one would you choose?

Or let’s say that on your wedding day, you get a diagnosis of a rare blood disease that usually kills its victims within six years. Your wacky aunt Cathy had that same disease and she knows of the only two doctors in the world that work with it. One doctor is actively doing research, testing new treatments, and curing patients with great success. The other is a drunk. Which doctor would you choose?

Or let’s say that on your wedding day, the universe starts a giant egg timer set for six years. When the egg timer goes off, you’ll either be divorced or you won’t. You’ve heard the rumor that 50% of marriages end in divorce, but Kevin and Cathy know some tips that can increase your odds of making it. More importantly, they know of a single strategy that would virtually guarantee that you would divorce before the timer went off. Would you want to know it?

Of course you would. You would invest with Firm A. You would choose the sober doctor. And you will do whatever it takes to ensure that you protected yourself from divorce. As it turns out, your aunt and uncle are onto something: there really is a secret.

The secret is turning towards

As part of his research, John Gottman conducted a study with newlyweds and then followed up with them six years later. Many of the couples had remained together. Many had divorced. The couples that stayed married were much better at one thing — the third level of the Sound Relationship House, Turn Towards Instead of Away. At the six-year follow-up, couples that had stayed married turned towards one another 86% of the time. Couples that had divorced averaged only 33% of the time. The secret is turning towards.

I think this is a pretty incredible piece of data. It suggests that there is something you can do today that will dramatically change the course of your relationship. More importantly, it suggests that there is something that you can not do that will lead to its demise. So, how do you turn towards instead of away? In order to understand turning, you have to first understand bids.

Turn towards what? Bids for connection

A bid is any attempt from one partner to another for attention, affirmation, affection, or any other positive connection. Bids show up in simple ways, a smile or wink, and more complex ways, like a request for advice or help. In general, women make more bids than men, but in the healthiest relationships, both partners are comfortable making all kinds of bids.

Bids can get tricky, however, and admittedly I sometimes miss more bids than I don’t. Indeed many men struggle in this regard, so it’s important to pay attention. Bids usually have a secondary layer — the true meaning behind the words. Call it the difference between text and subtext. A few examples to get your brain going: 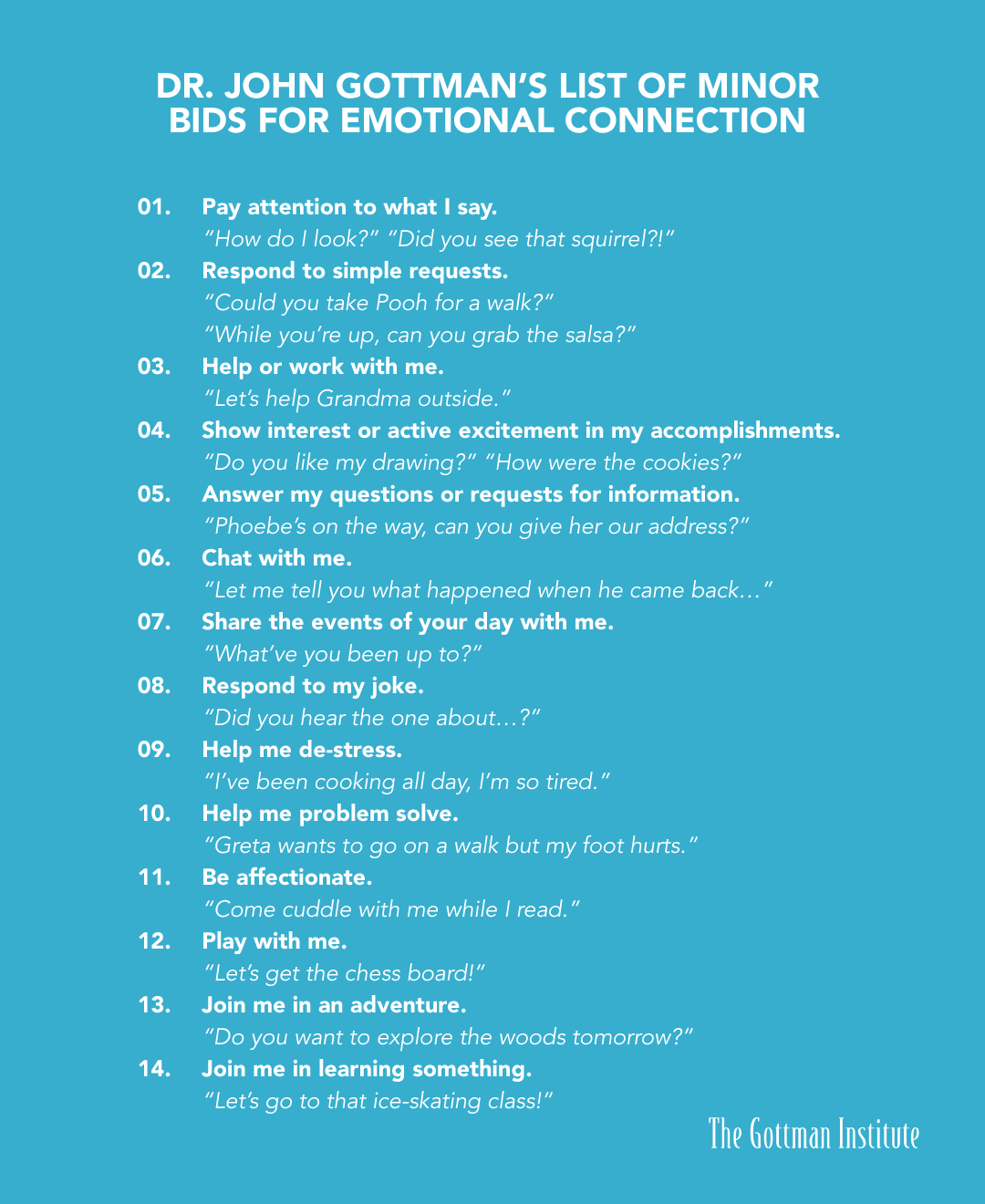 It is important that you learn to recognize bids and that you commit to making them to one another. Make the word “bids” part of your conversation and perhaps name your bids toward one another. It’s okay to say, “I’m making a bid for attention now” as you get to know each other in this early phase of your relationship. You can also practice discerning subtext together. Pick a show that is new to you both and watch it on mute. See if you can interpret the bids that the characters are making based only on non-verbals. Once you start to get intentional about your bids, you can concentrate on “turning towards.”

To “miss” a bid is to “turn away.” Turning away can be devastating. It’s even more devastating than “turning against” or rejecting the bid. Rejecting a bid at least provides the opportunity for continued engagement and repair. Missing the bid results in diminished bids, or worse, making bids for attention, enjoyment, and affection somewhere else.

How to turn towards? Pay attention to your partner

Turning towards starts with paying attention. Your work on bids will come in handy here. Simply recognizing that a bid has been made opens the door to response. If you’ve really been paying attention, you’ll respond to both the text and the subtext. As bids get more complicated, so will the nature of turning toward. For now, start simple. Take an inventory of the bids and turning in your relationship and share your responses with one another.

As you continue moving through life together, you will undoubtedly have to risk heading into more vulnerable territory. This will be easier if you’ve committed to building a solid friendship based on Building Love Maps, Sharing Fondness and Admiration, and Turning Towards Instead of Away. Your eccentric uncle Kevin and wacky aunt Cathy would be proud.