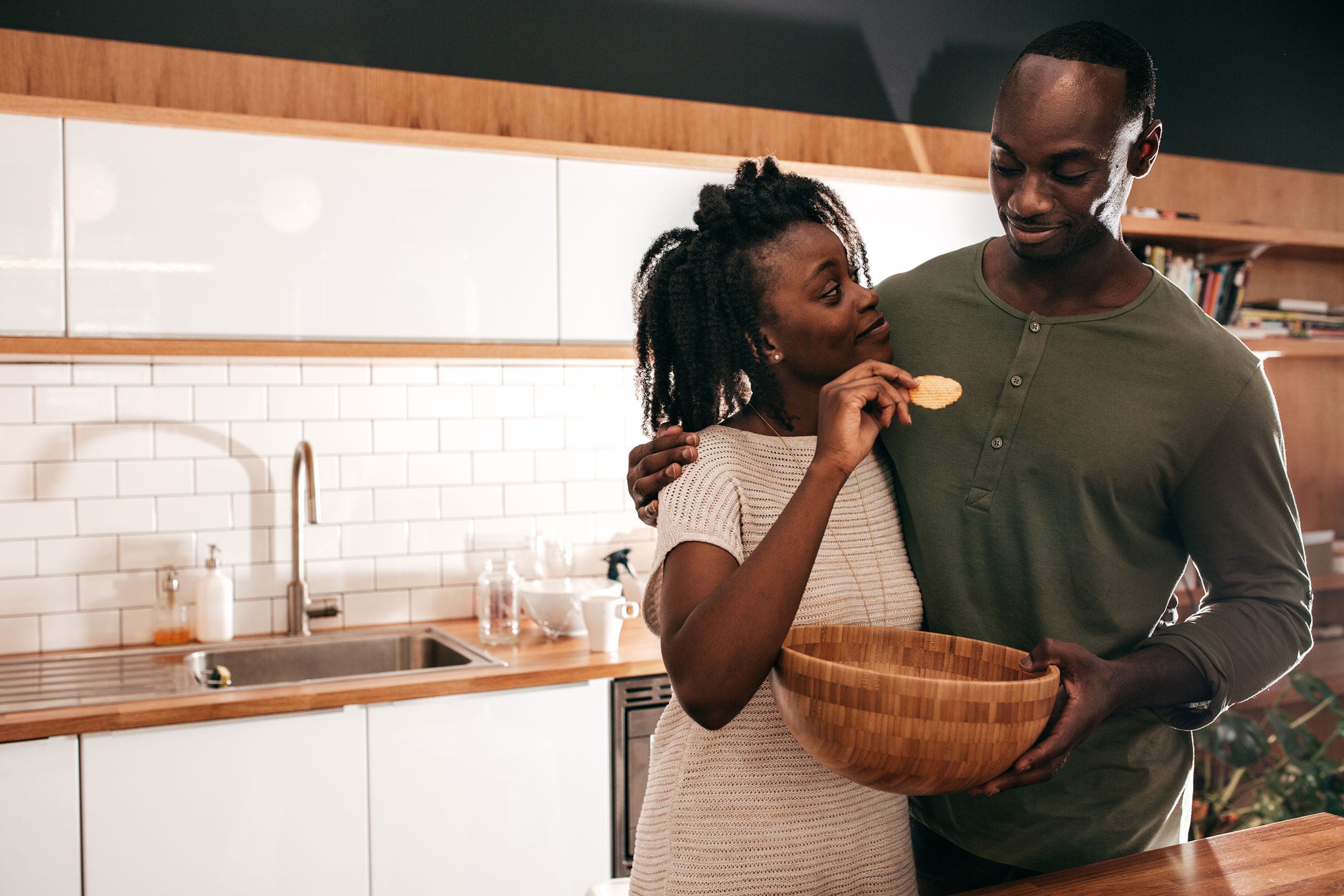 The waiter appeared at our table again, this time offering a basket full of bread rolls just pulled from the oven. I picked out my third piece of the night, and carved out a heap of cultured butter, flecked with sea salt.

“What have you been up to at work?” I asked my boyfriend Scott.

This was last June. We were at a corner table at a Michelin-star restaurant in New York. We’d been dating for three years, and living together in San Francisco for a little over a year. I’d temporarily moved to New York to participate in the four-month TED Residency. He’d surprised me with this dinner to celebrate the end of the program.

It was a grand gesture, and one I appreciated, because we were not doing well.

Our relationship had been shaky since January, turned upside down by several big changes in my life. After almost a decade in the corporate world, I’d quit my job to pursue my passion. I’d gone from earning a tech salary to earning no salary, and from working in an office with thousands of people to working alone at home.

We’d had several long, difficult conversations over the past few months. I told him what I needed from him and the relationship. I stated my values that I felt weren’t being met (community, friends, travel) and asked him if he could meet me halfway. We even went to a terrible couples therapist. He quoted his own Facebook posts to us and suggested that we, neurotic Jews, should start doing extreme sports together to reconnect. Ironically, we bonded over our mutual dislike of him.

During one of those difficult conversations, Scott mentioned that I never seemed to listen to him when he talked about work.

“You think what I do is boring,” he said. “It’s not. We’re trying to help save women’s lives by improving breast cancer screening.”

He was right. I never really understood what he did. I worked in tech but I’m not a particularly technical person. I could barely work my DSLR camera. When people asked me about my boyfriend’s job in artificial intelligence at Google, I replied with a word salad of “machine learning,” “computer vision,” and “medical imaging,” until they nodded sympathetically and the conversation moved on.

Finally the four months of long distance were over. Scott had flown across the country to see my TED talk, which focused on romantic relationships. I work as a dating coach and researcher, studying ways we can make better decisions in our love lives. The irony wasn’t lost on me that I was helping others create lasting love while my own relationship faltered. There, at that corner table at that fancy restaurant, I finally decided to learn what my boyfriend did for a living.

He provided the basics of his job—what he does and why it’s different from traditional radiology. When I asked more questions, he explained that mammograms consist of four pictures—one of each breast from above and from the side. Radiologists usually look all four images together to look for cancer, but Scott’s artificial intelligence team only looked at the two images from each breast, not the pair.

I began to ask him what the radiologists gained from looking at the four together, which the machine learning algorithms were missing out on.

“Sometimes a pattern appears in both breasts in the same place, which makes it less likely to be malignant,” he said.

“Oh,” I said. “So why don’t you train the model to take one set of images and compare it to the other to see if it’s symmetrical? Then you can rule out cancer if it is.”

“How would you do that?”

He put down his forkful of “foraged seaweed” and stared at me in disbelief.

“Wow, I’m just so impressed. That exact idea was used by one of the most competitive entries in a recent machine learning competition.”

I sat there, proudly listening to him explain the intricacies of his role on the mammography team. I felt connected to him, wondering why I’d never cared to ask him about his work before. I felt he too was seeing me in a new light, pleased with my newfound interest in his job.

I realized how much I’d asked him to change for our relationship, without being willing to put in the work myself.

And I knew this was the work. The paying attention, the asking questions, the listening. I knew this because of innovative research conducted by John Gottman, one of my relationship science heroes. Earlier that spring, I made a video with The Gottman Institute about “bids,” which are attempts a person makes to connect with their partner.


He conducted this research with his colleague Robert Levenson at the University of Washington. He brought couples into an observation facility, dubbed the Love Lab by the media, and recorded them discussing their relationship. He asked them to share the story of how they met and then to recount a recent fight. He even had some couples spend a week in an apartment decked out with cameras (with their permission) to see how they interacted during everyday moments.

Six years later, the researchers followed up with the couples and divided them into two camps: the masters, couples who were still happily married, and disasters, couples who had either broken up or remained together but were unhappy.

When he studied the tapes of these two types of couples, he looked for differences in the content of their conversations. What did the masters discuss that the disasters didn’t?

In his book The Relationship Cure, Gottman writes, “But after many months of watching these tapes with my students, it dawned on me. Maybe it’s not the depth of intimacy in conversations that matters. Maybe it doesn’t even matter whether couples agree or disagree. Maybe the important thing is how these people pay attention to each other, no matter what they’re talking about or doing.”

Simply put, successful couples are attentive. They listen, and they put their phones down when the other person wants to chat.

This research led Gottman to develop one of the core tenets of his philosophy for building successful relationships: healthy couples constantly make and accept bids to connect.

Gottman refers to bids as “the fundamental unit of emotional communication.” Bids can can be small or big, verbal or nonverbal. They’re requests to connect. They might take the form of an expression, question, or physical outreach. They can be funny, serious, or sexual in nature.

For example, your partner might say, “Hey, whatever happened with that situation at work with your manager?” or, “Do you want to talk about our plans this weekend?” or simply, “Can you pass the water?”

They could also give you a loving squeeze, pat you affectionately on the head, or tease you with a wink.

Bids are often purposely subtle because people are afraid to be vulnerable and put themselves out there. It’s scary to say, “Hey! I want to connect! Pay attention to me!” so instead, we ask a question or tell a story or offer our hand for connection. We hope we’ll receive connection in return, but if not, it’s less scary than pleading, “Connect with me, please!”

How should I respond to a bid?

There are three ways you can respond to a bid:

When your partner reads their email and sighs audibly, they’re making a bid. You could turn towards them and ask, “What’s wrong?”

Now imagine you’re tidying up the kitchen and your partner asks you how your day was. You could pause, look up from what you’re doing and respond with details about the challenging phone call you had that day. That’s turning towards. You’re telling your partner you see and value them.

Turning away from your partner, in the same situation, would be ignoring them or just grunting and continuing what you were doing.

Turning against them takes the form of an attack, such as replying, “Why are you always interrupting me when I’m trying to get things done?”

Why do bids matter?

A tendency to turn towards your partner forms the basis of trust, emotional connection, passion, and a satisfying sex life.

None of us are perfect at accepting all of our partner’s bids, but the masters are better at it than the disasters.

Some people think they can put their relationship on ice and then thaw it out with the occasional romantic date night. But relationships are built and maintained with daily attention, not grand gestures.

It was the bids we made and received at dinner in New York, not the fancy dinner itself, that saved my relationship with my boyfriend.

How often should I make bids?

Bid often. Master the art of the tiny moment. Reach out to show you care. Send a good luck message before a meeting. Leave an encouraging note on the fridge. Kiss your partner when they walk in the door—Gottman recommends a kiss that lasts at least six seconds.

Bids can be super short and simple, but they hold great power. The key is to make many bids per day to show your partner you want to connect.

In fact, happy couples bid all the time. Gottman found that at the dinner table, masters bid as many as one hundred times in a ten minute period, while disasters engaged each other only sixty-five times.

What happens when bids are ignored?

When our partner denies our bids, we internalize the experience. Our brains subconsciously keep track of how many bids are accepted or rejected by our partners. When our partner constantly turns away or against our bids, we begin to feel frustrated. We are more inclined to criticize our partners, which pushes them to be defensive and may result in an argument.

Gottman found when couples break up, it’s usually not because of issues like big fights or infidelity. More often, it’s a result of the resentment and distance that builds up over time when partners continually turn away from bids for connection.

The lesson here is to make many small bids every day. Pay attention and turn towards your partner’s bids. Listen for their sighs and look out for their winks. Make eye contact when they ask you a question. Engage with them when they point something out.

The power of bids

Prior to that dinner, I was guilty of the critique in that old saying, “The shoemaker’s children go barefoot.” In my attempt to help others with their relationships, I’d forsaken my own.

That night in New York I made a bid to connect with my boyfriend about his job. He turned towards me and we had one of the best conversations of our relationship.

I see that dinner as the turning point in our relationship, the moment when I realized I’d been taking him for granted and prioritizing my work, emails, and dating coaching clients over him.

Our entire relationship is different now. We are, as couples therapist Esther Perel would say, “on our second relationship” with each other. We are happier than we’ve ever been.

I take the time to make more bids. But more importantly, I pay attention to his bids. I put down my phone. And I listen.

Logan Ury is a writer, researcher, and dating coach who applies insights from behavioral science to help people have more meaningful relationships. She’s currently conducting research for her forthcoming Simon & Schuster book on how to make better decisions in romantic relationships. She was a 2018 TED Resident and formerly ran the Irrational Lab, Google’s behavioral economics team, alongside Dan Ariely, author of Predictably Irrational. Her interview series Talks at Google: Modern Romance, where she speaks with world-renowned dating and relationship experts, earned 1M+ YouTube views. For more writing and research on all things dating and relationships, follow Logan on Facebook and subscribe to her newsletter for free here.