“PC culture” is just the words we use now to talk about other people. It’s literally just updated terminology.

The world of love and its accompanying vocabulary is expanding. The days of “one-size fits all” or even “one-size fits most” orientation labels are a thing of the past. To help us look to the future, however, it is often helpful to draw from what we know.

In this case, we’re looking to etymology and a linguistic element called the “combining form.” Here is our guide on combining forms used to express different types of love and relationships, and how you may see them used. 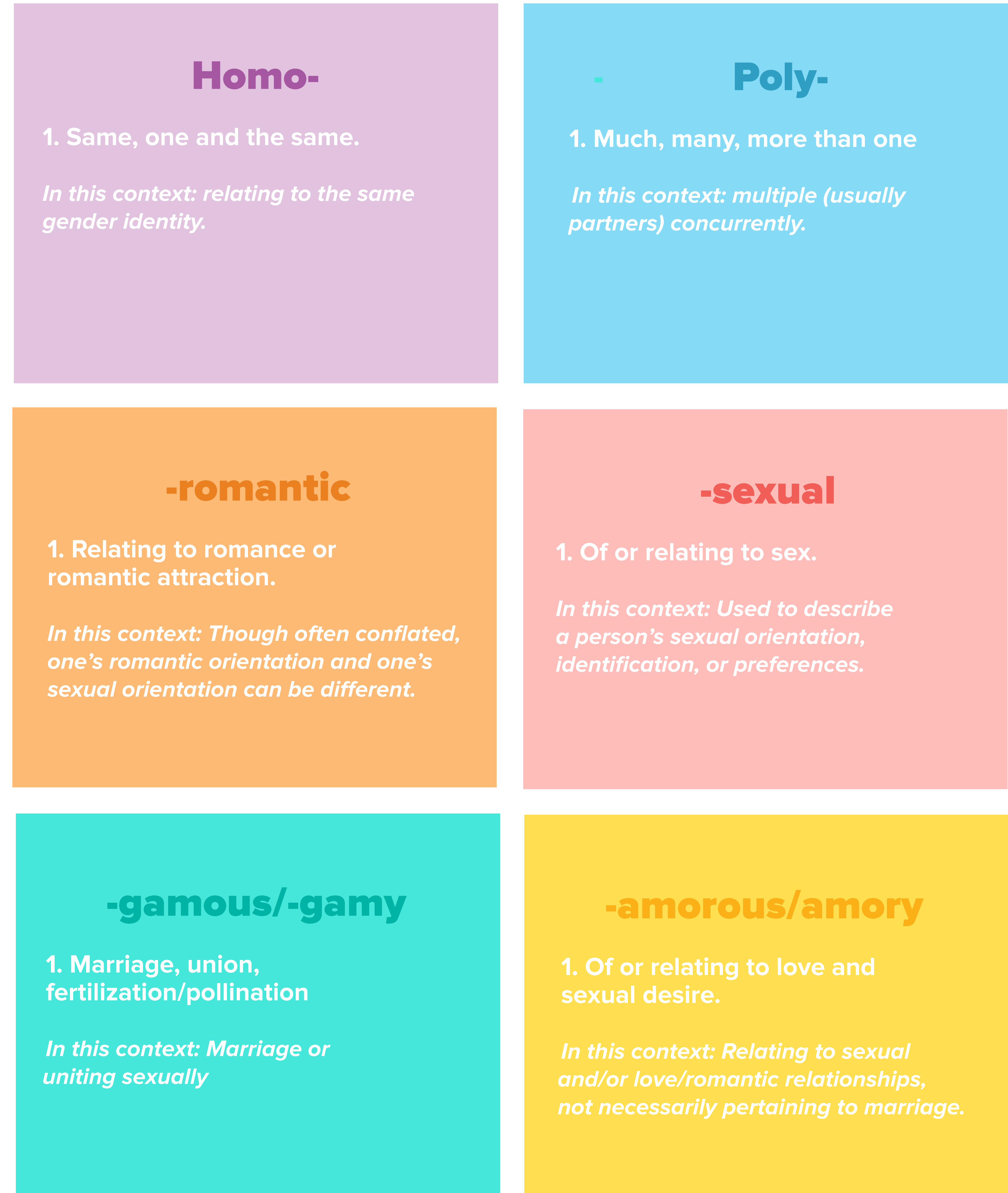 Monogamous = one + marriage
Colloquially we understand “monogamy” to mean being in one committed relationship at a time, not necessarily marriage. But, as we’ll dig into later, our terminology could use some expanding, as not everyone is choosing to engage with the institution of marriage.

Homosexual = same + sexuality/sex partner
This is typically used to describe those who prefer same-sex partners. As we expand our definitions, we may come to find that this refers mainly to who a person is sexually attracted to, but that doesn’t necessarily indicate who that person is romantically attracted to.

Heterosexual = other + sexuality/sex partner
This is used to refer to people who are mostly (or strictly) attracted to people of the opposite sex.

Bisexual = two + sexuality/sex partner
If we hold our definition strictly to its Latin roots, bisexuality refers to one who is attracted to two, and only two, genders. With our ever-evolving understanding of gender expression, this term is potentially limiting and its definition adheres to a now-outmoded, binary construct of gender. Colloquially, bisexual refers to someone who is sexually attracted to both men and women, and the term pansexual or omnisexual offers a more broad perspective (men, women, and gender non-conforming/non-binary individuals).

Polyamory vs polygamy
Polyamory and polygamy are not the same thing. Polyamory means many or more than one love/emotional connection, usually simultaneously. Polygamy refers to plural marriage and is colloquially tied to certain factions of the Mormon faith. Just as many Mormons are not polygamous, to equate polyamory with polygamy would be a miscategorization.

Often, polygamists we see represented on television (Big Love, Sister Wives, My Five Wives) are practicing polygyny (-gyny from the Greek gynos or Ancient Greek gunḗ, meaning woman), the state or practice of having multiple wedded wives at the same time. A woman with multiple husbands at the same time would be practicing polyandry (-andry from the Greek andros, meaning man). To continue playing with combining forms, a person with just two wedded partners simultaneously is practicing bigamy.

Equating the two is, however, understandable, as polyamory is usually referred to as “ethical non-monogamy” (unethical non-monogamy is cheating). We know from our combining forms that -gamy means marriage, so it would be logical to see the opposite of monogamy (one marriage) as polygamy (more than one marriage). But as the ways we look at marriage (and the reasons we get married) change, it makes sense to expand our definitions and terminology for love relationships, and move outside binary thinking. Polyamory is not actually in opposition to monogamy, just different.

This misconception may be due to the fact that culturally, our understanding of the terms monogamy and even polygamy precede our awareness/understanding/acknowledgment at large of polyamory.

Not-Necessarily-Straight A’s
A- is a fun combining form because it’s basically just saying “no thank you” to whatever follows it. For example, someone who identifies as Agamous is choosing not to have marriage, as a concept, in their lives. An individual can identify as heteroromantic (romantically attracted to or gets “crushes” on people of the opposite sex), but asexual (not interested in sexual activity with anyone, thank you).

Everything on a spectrum
A note of caution: labels are most helpful in self-exploration, or to further your understanding of someone who already uses them. Labels are less helpful when they’re being used to define or confine someone without their permission. If the introductory combining forms featured here feel too limiting, specific, or two-dimensional for you, you may want to check out the “More Complicated Attraction Layer Cake.”

The best part about exploring an expanded world of love and relationship definitions (aside from being able to hold your own at a cocktail party) is the empowering feeling that can come from finding something that more accurately describes how you feel.

In Anne of Green Gables, Anne hates when people point out her “red” hair, calling it her “lifelong sorrow.” But later, when a neighbor tells Anne her hair has become “a real handsome auburn,” her outlook changes. A more specific word makes all the difference.

Editor’s Note: We have decided to limit this introductory exploration to the areas that best speak to the work we do: love and relationships. For additional reading on gender, sexuality, and pronouns, we recommend starting with these resources.