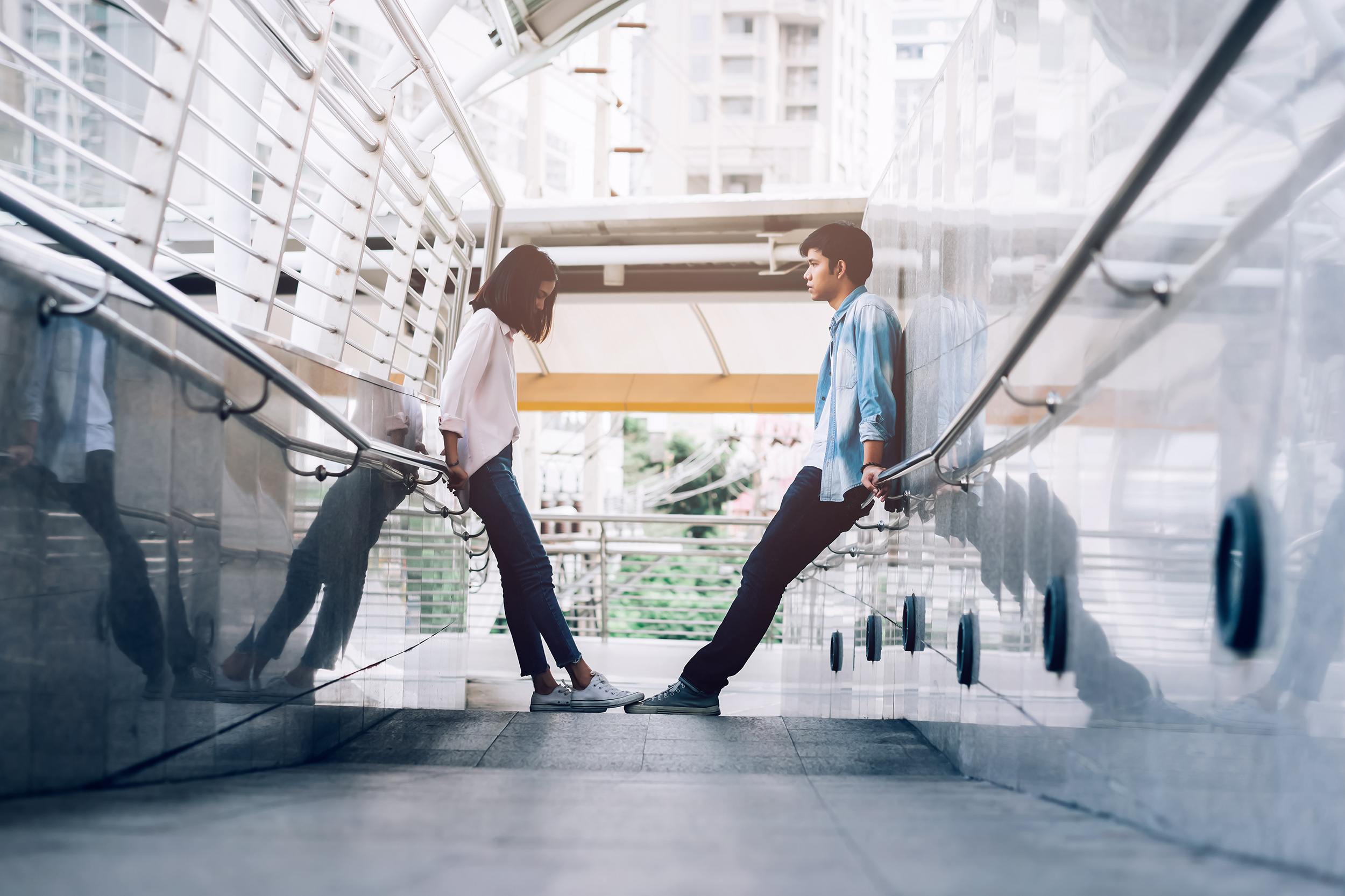 Editor’s note: The “After an Affair” series shares one individual’s experience in the aftermath of his own infidelity—reckoning with it, then repairing using Gottman’s Trust Revival Method. We recognize that this may be challenging for some to read and advise those still dealing with the trauma of an affair to exercise their best judgment in reading this. The experience and opinions expressed in this article are by no means exhaustive and belong solely to the author. You can read Part 2 here.

“So, you are telling me… that you cheated on me?”

My partner’s words came trembling out of her mouth in utter disbelief at what I had just announced.

I shamefully nodded my head and agreed. I had just woefully informed my partner I cheated on her. She would never have found out, but I wanted to own up to my mistake. I sadly reassured my partner that my actions were wrong and I was deeply apologetic.

After a long, unsettling silence, we both agreed we still wanted to work things out and be together. We started to brainstorm and research ways to recover from infidelity since our trust had been broken.

After a few days, my partner suggested a book we could both read to help us navigate through the cheating. She proposed the book “What Makes Love Last?” by Dr. John Gottman, an American psychological researcher who did extensive work on divorce prediction, marital stability, and recovery from infidelity.

We each purchased the book and began our tedious journey to recover from the breach of trust.

Moving past an affair

Betrayal is an awful experience.

Trust is such a vital piece of romantic relationships and an act of disloyalty can heavily tarnish that belief of reliability, ability, or strength.

Take it from me. Recovering from cheating is an onerous task that entails a lot of stress, anxiety, and emotional strain. It is extremely taxing but it could be worth it for the right relationship.

My partner and I implemented the tips from the book to heal from my mistake and after a great deal of time, our trust in each other started to rebuild. I truly do believe a relationship could be saved after an act of infidelity.

We want to pass along our experience using Gottman’s approach for recovering from infidelity to help other couples going through something similar.

Our first steps in recovering from my cheating were to understand why it happened, whether we could save the relationship, and if future infidelity could be avoided.

But let’s begin by looking at what exactly caused me to cheat.

The making of a cheater

Gottman states that people often say cheating comes out of nowhere, but usually the cheater heads down a slow, undetected pathway before the physical cheating actually occurs.

We learned that often, cheating is due to deficiencies in the relationship that leads one partner to feel lonely and devalued. Gottman insists that a partner feeling this way is typically caused by couples dismissing or turning away from each other’s emotions over time.

Some examples of turning away could be when my partner was distracted by her phone or laptop while I was giving an emotional bid—an attempt for attention, affirmation, affection, or any other positive connection.

She would completely ignore what I would say, disregard my response or interrupt me while I gave the bid for personal connection.

When my partner constantly turned away from building a connection, I developed a really toxic behavior—negative comparisons.

A negative comparison is exactly what it sounds like. It’s a harmful comparison of one’s partner to someone else. For example, when I was bickering with or feeling scorned by my partner, I would find myself comparing these interactions (negatively) to the positive attention I received from the people I met, friends, or just about anyone else in my life.

“Wow, look at her smiling at me and laughing at my jokes. I bet if I was with her, I wouldn’t be so stressed out all the time from the trivial arguments I have with my partner.”

Because I frequently engaged in a series of negative comparisons like the one above, I began to tell myself the story that I would be happier with someone else.

Gottman declares that when a person spirals down this route, they begin to focus on their partner’s negative traits and downplay their positive traits. The more times a person is caught up in negative thoughts about the relationship, the more often negative comparisons are triggered—and the door for potential cheating opens wider.

After a constant stream of negative comparisons in my head, a reversal in the way of how I understood or interpreted my partner in the relationship’s timeline commenced. My partner’s traits such as “extremely loving” or “affectionate” began to sour into “controlling” and “really needy.” I subsequently began to rationalize to myself why I was not at fault and my partner was responsible for how bad or alone I felt.

Resentment built up, I was primed to be disloyal with Negative Sentiment Override. Then, I crossed the line.

Is the relationship worth saving?

After the act of unfaithfulness, how did we decide if the relationship should be mended and rescued?

After all, not all relationships should be saved following an affair. The act of cheating is an alarming sign that one or both partners may not be ready to be in a committed relationship.

In order to find if the relationship should be saved, both of us had to be honest with ourselves and answer some questions to help decide if we should continue the relationship after the affair.

Gottman provides questionnaires in his book to help readers discover the likelihood of the relationship surviving following an affair.

My partner and I sat down and meticulously answered each of the questions from the appropriate questionnaire in the book.

Here are some questions provided by Stephen Vertucci, an expert divorce attorney, that we also considered in assessing if the relationship could be saved.

Upon completion of all these questions, we reviewed our answers and determined if we should end the relationship or proceed forward. Our results showed we had a high chance for our romantic relationship to be restored and we decided to move ahead with the steps to recover.

This step was a vital step to take to assess if our relationship had a shot of recovering from my deceitful act.

If I had mixed feelings about continuing the relationship, it would probably have been best to end the relationship. Maybe my betrayed partner could have said she was not able to forgive me, the disloyal person, and we would simply decide to walk away from the relationship.

Regardless, we knew it was better to decide if the relationship can be salvaged first before we began the arduous journey to rebuild the relationship. We could have both realized that it was best to go our separate ways.

Since we decided that the relationship is worth saving, we sought out the help of a skilled professional to guide us through these complex issues. My partner and I used a relationship counselor and it was extremely beneficial. Having a mediator to discuss the problem at hand, without going off-topic and attacking or interrupting each other, was critical to our recovery.

A relationship counselor has the skills and training to listen and offer practical insights to improve the situation. Having a licensed professional was different from just discussing the issues with our friends. Our friends could listen and provide emotional support but could be biased or may even get sick of constantly supporting us.

After we decided the relationship was worth saving, we began to evaluate the likelihood of cheating in the future.

Would I cheat again?

How did we know if I would engage in infidelity again in the future?

Well, Gottman provides two proven questionnaires to assist us in determining if there is a higher risk for future betrayals. His method helped us determine if there was a greater risk for unfaithfulness between my partner and me.

Some warning signs for cheating again may include if a partner:

Of course, there are no guarantees that I would cheat again, however, we could evaluate some signs that indicate that it may not be best to continue the relationship because I showed a higher risk for cheating in the future. Since I showed that I was less likely to cheat again based on the results of the questionnaires, we decided to move forward in our journey to recovery.

The journey to restoring trust

After my partner and I worked through and determined the relationship was worth saving and that we had a low enough risk of cheating in the future, we focused on rebuilding the broken trust in the relationship.

We put our doubts aside and implemented the blueprint laid out in the Gottman Trust Revival method from the book.

You can read about it here.

Brandon Leuangpaseuth is a writer from San Diego, CA, who is skilled at building better relationships, handling divorces, and bettering marriages. He hopes to share his knowledge and experiences to help other couples or individuals create deeper connections in their lives.