The early stages of a romantic relationship is called limerence. Limerence is the easy, involuntary part of being in love with another person. It’s commonly associated with “having a crush” or “puppy love” or the “honeymoon phase.” The limerence phase is usually marked by a near-obsessive infatuation, strong sexual attraction, and an often overwhelming desire for reciprocation. Limerence is the period of hope, not only for what the relationship is, but for what the relationship could one day be.

Limerence is a lot of fun. It’s also pretty dangerous. Consider some of the scary words in the previous paragraph: involuntary, obsessive, overwhelming, even hope. All of these things allow us to suspend judgement and ignore and forgive things that deserve more examination. Perhaps the most dangerous word, however, is phase. Limerence, as a phase, lasts approximately 2 years. It shouldn’t be a surprise that this is roughly how long the “newlywed period” lasts. It’s also pretty consistent with the time it takes many couples to meet, date, and decide to marry.

The trouble is, when limerence expires, the real work of love begins. The blinders fall off and the puppy love is forced to evolve into something more dogged. The relationship is no longer sustained by romantic attraction. This isn’t to say that it doesn’t exist. It’s just not a sustaining force. When limerence expires, couples see the relationship in a more realistic light. Often the warning signs they ignored early on remain as subtle but persistent seeds of contempt, a powerful relationship killer. It is critical that new couples protect themselves from this future now.

The second level of the Sound Relationship House, Share Fondness and Admiration, represents the foundation for that protection. Sharing fondness and admiration is a friendship skill which serves as the antidote for contempt. When I work with new couples, they always want to skip this step. They claim it as one of the strengths of their relationship. Of course it’s a strength. That’s the power of limerence. But limerence is a phase. It’s important that couples develop systems of fondness and admiration that last beyond the initial crush.

Let’s look at them separately beginning with fondness. What does fond even mean? Does anyone use that word anymore? It sounds to me like something Mr. Darcy would say to Jane Eyre (I know they’re not in the same book, but you get what I’m saying). Fondness is affection, often naive, for another. To share it is to make it more mature. It’s not enough to say “I’m fond of you.” It’s important to share why. “I’m fond of you” includes:

Take a minute right now to fill in the blanks. And find some time over the next week to say these sentences out loud to your partner. You may believe that your partner already knows this stuff, but I guarantee they’ll enjoy hearing you say out loud. Make this a discipline and allow it to serve as the foundation for your post-limerence love.

In addition to proactive fondness, couples must learn to show appreciation. Appreciation is an expression of one of my personal favorite values: gratitude. I wrote about gratitude in my Relationship Alphabet series. Showing appreciation is primarily about saying “thank you.” There is no reason not to include “thank you” as part of your everyday vocabulary. For making the bed. For passing the butter. For sharing your fondness. But thanks must extend beyond “what you do for me” and into “who you are.”

One of my favorite Gottman exercises is called “I Appreciate…” It’s on page 67 & 68 of The Seven Principles for Making Marriage Work. The exercise is simply a list of positive adjectives: 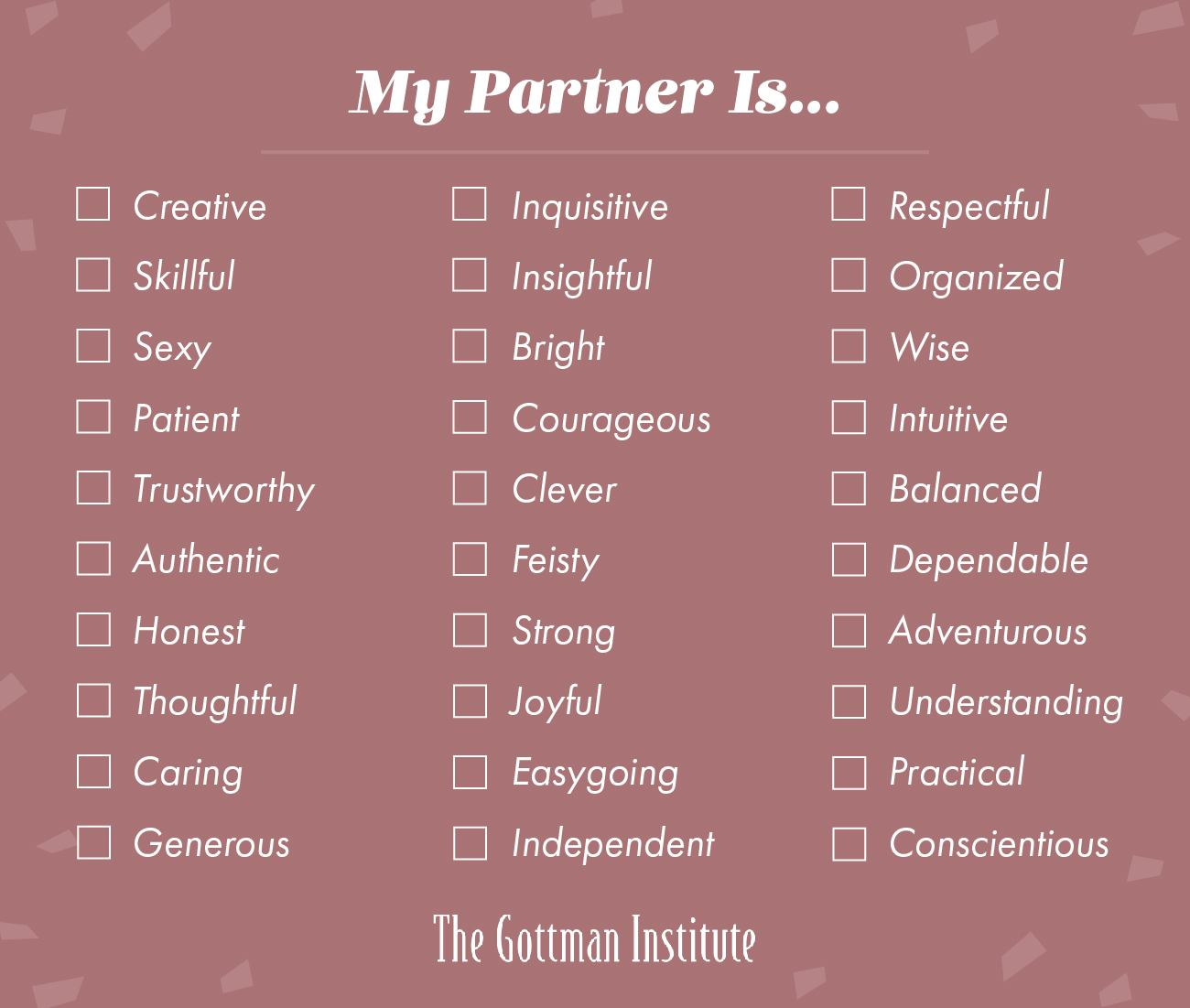 …and many more. In the exercise, you choose three adjectives from the list that describe your partner. Try it now by choosing one of the adjectives above, or think of your own. Then name an actual incident from the past week where your partner demonstrated that quality. Write it down. The next time you get a chance, share it. Say, out loud,  “I appreciate that you are _____. I noticed it last week when _____.” Again, make this a discipline. Commit to sharing at least three of these appreciation statements each week. In doing so, you’ll voluntarily reinforce, for yourself and your partner, the positive aspects of your relationship.

There’s another piece of this exercise that I really love. Let’s say you picked “relaxed” and your partner picked “strong.” There’s a reason those attributes are meaningful to you. Explore those reasons together. Why is strength important? What is it about being relaxed that holds value? When couples can identify and articulate their core values together, they can get a jump start on creating shared meaning, which is at the top of the Sound Relationship House. Start with gratitude and appreciation as a means to deepening your love beyond limerence.

Sharing fondness and admiration in intentional, consistent, faithful ways is the antidote to contempt and, more importantly, it increases the amount of affection and respect in a relationship. Your relationship, especially in its early stages, may feel full of infatuation, sexual attraction, and hope. When the newness wears off, however, you’ll be glad that respect, trust, and love remain as a result of your sharing.