Repair is easily my favorite concept in the entire Gottman encyclopedia. Typically, we think of repair in terms of what we have to do to a car or a washing machine or a botched haircut. As in, it’s broken, it needs repair. But in relational terms, repair is less about fixing what is broken and more about getting back on track.

Masters of relationships repair early and often. And they have lots of strategies for how to repair. Gottman describes a repair attempt as “any statement or action — silly or otherwise — that prevents negativity from escalating out of control.” The reason I love the concept so much is because of that word “any.” It leaves a ton of room for creativity. And because every relationship is different, finding the repair strategies that work for you can actually be a unique game that belongs to just the two of you.

But of course, you have to be in the right frame of mind to play. Whenever our family has an especially long, stressful, tiring day — the kind of day where nothing goes right and we’re all about to tear each others’ heads off — my seven year old will, without fail, ask to “play a family game.” It’s her own attempt at repair I guess, but man those games are tough. And sometimes it’s hard to rally.

Why do repairs work?

There’s a book I love that was given to me by one of my favorite therapists. (As in, one of my favorite therapists that was actually my therapist.) The book is called Finite and Infinite Games by James Carse. Carse argues that human beings are constantly playing one of two kinds of games, finite and infinite. In a finite game the boundaries are really clear. The rules are predetermined and when a player violates the rule he is penalized. The game has a specific time limit and the object of the game is to win. It’s football. American Ninja Warrior. And the stock market.

In an infinite game, there is no time limit and the boundaries are fluid. The rules are made up by the players and can change at any time. The goal is not to win, but instead, to prolong the game. It’s the game of life, or for our purposes, the game of relationships. Carse also suggests that, “if you must play, then you cannot play.” This notion speaks to the value of cooperation, intentionality, and agreement. Players (partners) can’t be forced to conform to unknown or unstated set of rules, but instead must work together to draft rules that ensure the continuation of the game (the relationship).

How do I use a “Repair Checklist”?

Repair is ultimately about rules. More specifically, it’s about making rules together. The Gottman library of interventions include a Repair Checklist. It’s a list of phrases clustered into different categories including I FEEL, SORRY, GET TO YES. The idea is that as conversations escalate, you can turn to the list and identify which phrases will and won’t work. 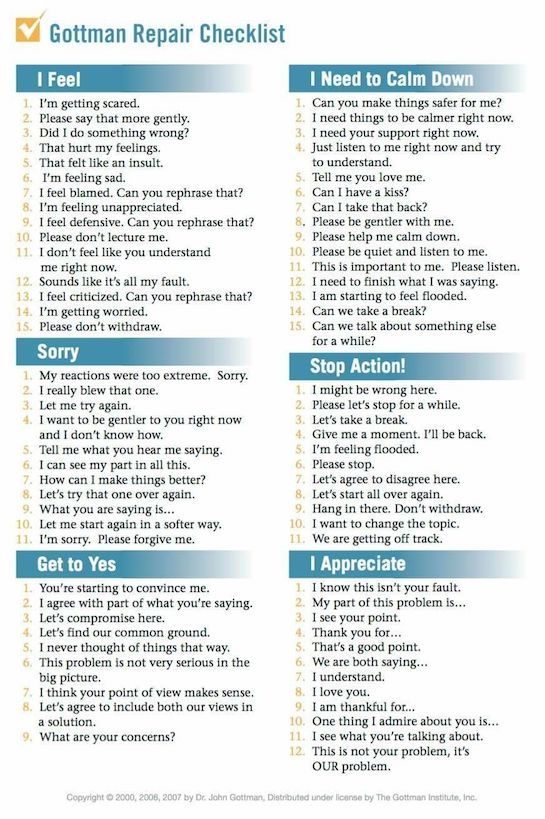 Purchase this checklist as a PDF poster here.

I especially like the category called STOP ACTION which is designed to interrupt the escalation of an argument before one or both partners gets flooded and redirect the conversation. There are a dozen or so phrases to choose from and the “game” is looking at the list together and deciding what might work and what might not. You might decide together, “I really like #3, #6 and #11, I think those will help me calm down. But I do not like #10. If you use that phrase with me it’ll only make it worse.” (It should be noted that “calm down” is not an option on the list of suggestions because “calm down” never works for anyone ever. Don’t use it.) This process of engaging the Repair Checklist is a great example of shaping and prolonging an infinite game by making rules together.

But you’re not limited to the list. I have a couple in my practice that met at a Super Bowl party. One of their stop action techniques is to “throw a flag.” They literally have a yellow flag like the ones football officials use and either partner can throw the flag at any time to keep an argument from escalating. The reason that it works is because they agreed to create and follow that rule.

How important are repair attempts in a relationship?

No matter what strategies you choose, it is absolutely critical that you master the art of making and receiving repair attempts. In Dr. Gottman’s research, the consistent failure of repair attempts is a sign of an unhappy future. Statistically, a marriage can survive The Four Horsemen of the Apocalypse, but only if partners learn to repair effectively. Without that, you get stuck in a finite game where even when one partner wins, you both end up losing.

Playing the infinite game is complicated because creativity is always complicated. But start simple. Remember that a repair attempt is any statement or action — silly or otherwise — that prevents negativity from escalating out of control. So, have fun brainstorming what will work for you. Is it ironic that play is the real work of the relationship? Maybe. But if you relish the game, you can prolong the relationship and ultimately reap the the mutual benefit of increased trust and intimacy.