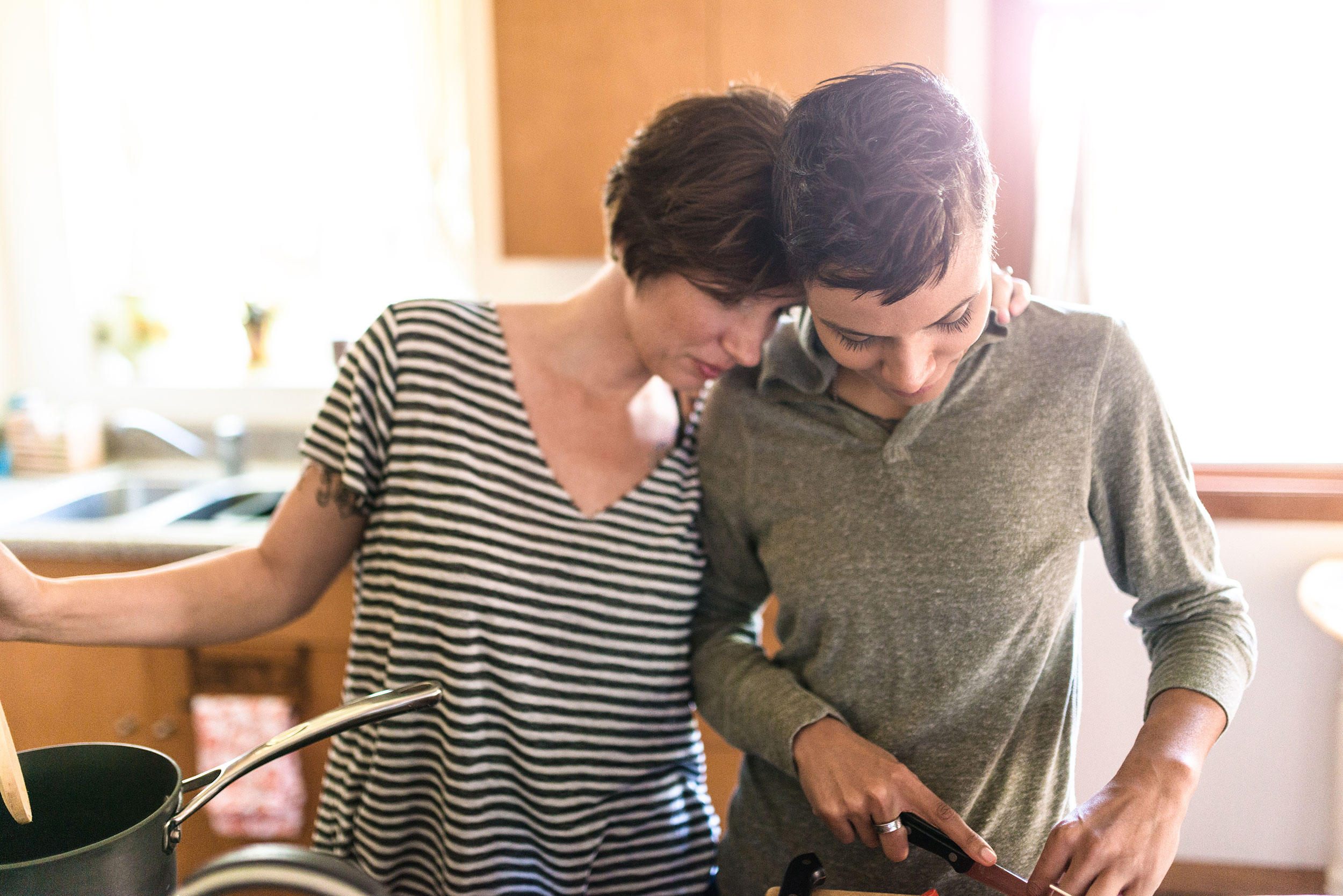 In our marriage, David is the more independent one. Even as a child, one of his most common refrains when anyone tried to help with something was “I’ll do it myself!” That served him well in becoming a functioning and independent adult, especially in a culture that values self-sufficiency and self-determination. A degree of autonomy is important in a relationship (e.g. having hobbies or activities you prefer to do on your own, or practicing individual self-care or self-soothing), but complete autonomy doesn’t serve us well in marriage; in fact, it often pushes us apart. For the health of our relationship, David had to learn how to practice healthy dependence with Constantino.

We got married in our late 30s, having lived decades as adults before we met each other. Constantino had been in a nine-year relationship and had learned how to navigate the healthy balance between intimacy and independence. David had lived alone for about a decade before we started dating. So once we got married and moved in together, David demanded very little of Constantino, both practically and emotionally. David loved Constantino, but asked almost nothing of him. That made Constantino feel unneeded and helpless in connecting with David.

In their book Attached, authors Amir Levine, M.D. and Rachel Heller, M.A. explore attachment styles and describe healthy dependence as an essential component of intimacy in a relationship. “An elegant coexistence that does not include uncomfortable feelings of vulnerability and fear of loss sounds good,” they argue, “but is not our biology.” Depending on others is part of our genetic makeup, and although our practical dependence on others diminishes as we become adults with more self-reliance, our emotional dependence on loved ones remains strong. Those who reject depending on others and embrace extreme or complete autonomy can actually push themselves toward self-isolation.

Healthy dependence as an act of turning toward

In our marriage, we’ve discovered that healthy dependence is a form of turning toward your partner. When David needs Constantino, he must go to him and engage with him. Expressing a need requires some vulnerability because it means that you lack something or require help that your partner can supply. That vulnerability creates intimacy, and the feeling of being needed helps your partner feel more secure in the relationship. Being depended on helps Constantino feel that he is appreciated and useful in our marriage rather than feeling left out or neglected.

Learning to depend on someone is also a form of accepting influence because it requires letting go and yielding to your partner’s ideas and actions. Research indicates that men find it harder to accept influence from their spouses, and it’s true that some husbands in heterosexual relationships adopt the traditional notion of being the “man of the house,” seeing themselves as the providers for their families and eschewing opportunities to accept influence from their wives.

But when men do that, they avoid healthy dependence and assert autonomy (or even authority), which turns them away from a possibility to become intimate or vulnerable with their partners. If that includes decision-making, it can create an unhealthy power dynamic in the relationship that can lead to resentment or even divorce. In those situations, it is incredibly important for husbands to practice emotional intelligence and accept the influence of their wives to keep their relationships healthy, happy, and stable.

Research by The Gottman Institute also shows that many women already accept their husband’s influence, but to resist depending on your partner is not necessarily a gender-specific problem. Many wives may resist leaning into dependence as well, given feminist rejections of traditional gender roles that rely on dependence. Other research argues that, across the world, women must assert their independence in the workplace and in other areas of life in order to break through the inequality that still exists among genders.

While it’s important for both partners in any relationship to accept each other’s influence, it’s possible that some women may resist depending on their husbands because it may feel as if it threatens the autonomy they’ve worked so hard to attain. But, in order to be more emotionally attuned, it is important for men to understand and respect the autonomy and independence that their wives may need, and to find other ways to depend on each other and connect that satisfies both partners. With a clear expression of needs and empathy for each other, partners can find common ground regarding depending on each other for support.

In our marriage, David knows he must intentionally practice depending on Constantino despite his longtime tendency to be independent. It isn’t easy. At first, he learned to ask for small, practical things that he would otherwise do himself, like asking Constantino to pick up dinner because David had to work late and was tired. Slowly, David has been moving to more meaningful ways of leaning on Constantino, such as expressing fears about a work project or asking for advice about an interpersonal conflict with a friend.

Even if David can assert his independence, it doesn’t always mean he should. Turning toward and leaning on Constantino is a way of letting him in and creating intimacy, and of accepting Constantino’s influence. Now, when David is tempted to say, “I’ll do it myself!” he pauses and reminds himself to ask the question, “How can we do this together?”